The European UPRIGHT project comes to an end

For four years, the Kronikgune Institute has coordinated at European level the project consortium formed by nine organizations. 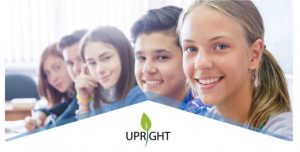 The overall objective of UPRIGHT has been to promote mental wellbeing and prevent mental disorders by improving the resilience capacities of young people through a whole school approach targeting adolescents, their families and education professionals. The project has implemented a holistic and universal intervention over three years to strengthen the personal confidence and cognitive function of young people aged 12-14, and empower them in (i) coping skills, (ii) efficacy, (iii) social and emotional learning, and (iv) mindfulness practice. The intervention has been carried out through two psycho-educational programs: “Well-being for us”, which promotes personal resilience, and “Well-being for all”, which promotes social resilience and the culture of mental well-being in the educational center. These two programs are developed following a structured manual, although they are also flexible and compatible with other programs of the center and with other training courses for teachers.

39 schools from five European countries have participated in the intervention carried out during three years, some of them as intervention centers in which the two programs have been implemented and the others as control centers. In total 2845 adolescents, 2430 families and 396 teachers have received the UPRIGHT intervention.  Although the project has analyzed data from 4,176 adolescents (2,125 in Euskadi intervention and control), 550 teachers (117 in Euskadi) and 2,744 families (497 in Euskadi). The analysis of the data collected shows that the effectiveness of UPRIGHT in Europe and the Basque Country has been similar. The data analyzed shows that all the stakeholders and participants in the project, present a high level of satisfaction, highlighting the skills related to emotional management, self-knowledge and social awareness. In general, we can say that the UPRIGHT intervention has promoted more positive social relationships, both at family and school level.

All the materials to implement the UPRIGHT adolescent resilience intervention are available at the following link: https://www.kronikgune.org/en/upright-intervention-materials/