This collaboration managed by Kronikgune has contributed to the transfer of knowledge from Euskadi to the European regions. 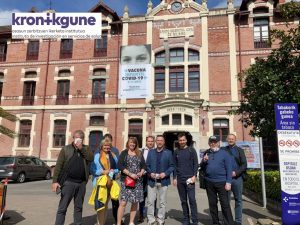 Visits and working meetings organized during the three days that the Czech delegation has stayed in Euskadi, in order to make better known of Osakidetza health organization, and the achievements made in recent years in the field of aging and chronicity, and integrated care.

The first day of the visit focused on integrated care and digitalization of the healthcare system. In addition to presenting the strategic framework of Osakidetza, it was shown how the socio-sanitary coordination is structured, the risk stratification tool and the digitalization strategy of the system including the Electronic Health Record, the Personal Health Folder or the Osanaia platform used by nurses. This day was organized in the General Directorate of Osakidetza.

Finally, the Kronikgune offices were the place chosen to present some of Osakidetza’s services and programs for patient empowerment and participation. Thus, the Elderly Care Program (PAM), Osasun Eskola, Active Patient-Paziente Bizia, the video consultation project or the patient empowerment program Kronik ON were presented.