On 18th and 19th October, Kronikgune hosted the first meeting of the Scirocco European project. The aim of the meeting was to review the project progress, move forward in the decision-making for the next steps and share the Good Practices in integrated care from the 5 participating European regions. 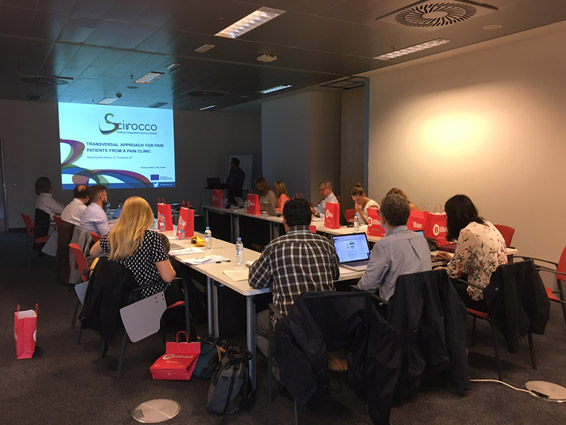 The Scirocco European project “SCaling IntegRated Care in COntext” aims to provide a validated and proven tool (Adapted Maturity Model) that facilitates the scaling and successful transfer of Good Practices in integrated care between European regions. The project is currently in the phase of selecting more feasible initiatives for their scaling among the proposals between the participating regions.

Osakidetza and Kronikgune are participating in the Basque Country, Osakidetza as a region interested in the adoption/transfer of knowledge and Kronikgune as a leader of the “Analysis of the maturity requirements of a Good Practice” work package.

The first project assembly was held on 18th and 19th October in Barakaldo (Bilbao Exhibition Centre), which was attended by around 20 people. During the meeting, they shared the advances in relation to the review of the literature and the Delphy Study carried out for the adaptation and validation of the Maturity Model developed by the EIP-AHA B3 action group. In addition to presenting the adapted version of the Maturity Model, the selection method of the most viable practices was also agreed and defined and an initial redefined version of the adapted Maturity Model was presented.

The decisions taken over the two days define the roadmap for the work to be carried out over the forthcoming months.

It is worth mentioning that Enrique Bárez (Osakidetza) opened the meeting by presenting the “Transversal approach towards pain, from a Pain Unit” experience, proposed as a Good Practice from the Basque Country, and which received considerable interest from those present. To close the meeting, Helen Schonenberg presented the ACT@Scale European project, in which the Basque Country is also participating, sharing the work performed to date and showing the similarities and synergies with Scirocco.